Canada 2015. Day 10 (Aug 8, 2015). After a light breakfast (coffee, croissants with dulce de leche San Ignacio, strawberries with Chantilly cream), Craig and I went to collect hydra from a pond a few hundred meters from the house—we found both green and brown hydra. We left Craig & Brenda’s house at around 11 am in the direction of Cochrane, AB, so that we could take route 1A rather than the Trans-Canada Highway (Route 1). There was a lot of traffic and some construction getting into Cochrane so we wasted a lot of time there. It was a very nice ride from Cochrane to Canmore, AB, so we did not mind the delay. After Banff, AB, we took the pretty Bow Valley Highway (1A) to Lake Lousie where we got gas. At the gas station we briefly met a woman traveling on a colorful Mercedes van. She had a basil plant inside the van; a very good sign! Apparently there was no diesel in town so she was a bit distress. We had planned to continue north towards Jasper but it was pretty late so we decided to go west instead towards our destination at Emerald Lake. We took a short detour to visit the beautiful Takakkaw Falls in Yoho National Park. The Falls are in the famous Burgess Shale; a geological formation well known to paleontologists and biologists because it contains many interesting fossils of soft-bodied animals from the Cambrian era. As I drove towards the falls, I looked up the mountains wandering if my Pomona College colleague Bob Gaines was around collecting fossils. From the falls we drove to Emerald Lake. A few kilometers before the lake we visited the Natural Bridge over the Kicking Horse River. The lodge at Emerald Lake is very nice and the view from our room was breathtaking. Incredibly, there is WIFI access only in the main lodge and not in the rooms. For dinner we went to a restaurant—called Cilantro—by the entrance bridge to the lodge. We had bison hamburgers served with spicy boiled potatoes. They offered three sauces for the burgers: mango, spicy red, and chimichurri. After dinner we sat on the main lodge to use the WIFI (the password was burgess88). I was tempted by the waitress to try their amazing white chocolate cheesecake. Adrián only had a bite so I ate most of it. A bad day for my diet! 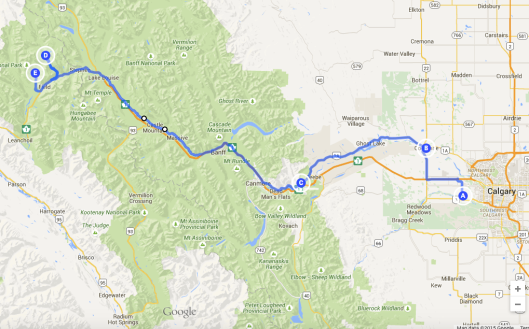 3 thoughts on “Into the Canadian Rockies”