Canada 2015. Day 16 (Aug 14, 2015). Juán de Fuca was born Ioánnis Phokás in the island of Cefalonia (Greece). He was a pilot working for the Spanish Crown when he explored the strait that separates Vancouver Island from the Olympic Peninsula. De Fuca was in search of the fabled Northwest Passage connecting the Pacific and the Atlantic Oceans. In order to cross the Juan de Fuca Strait we were in line at the ferryboat by 9 am. Motorcycles are allowed to go to a special place ahead of the cars. While waiting with the other bikes we met a British guy who lives in Canada and used to ride a KLR, a couple from Boise, ID, on a Harley, and a guy from San Francisco (Victor) on a white BMW F800GS like mine. Victor had been riding the dirt logging roads of the island with a local guy and was in his way back home. At one point we were interviewed by the US customs guys asking questions like: Do you carry any alcohol or tobacco sir? Any weapons? Are you carrying any fruits or citrus? Have you purchased any merchandise in Canada? We were then asked to go to an office where another guy looked at our passports and gave us a piece of orange cardboard with a number on it and a piece of tape to attach the number to your windshield. It was cloudy when we left Victoria and it was raining when we arrived at Port Angeles. The crossing was quite uneventful except that I found there Jim Carey, a professor colleague of mine who studies demography in insects. I could not believe my eyes when I saw Jim on the boat. He was equally surprised to see me there dressed like an astronaut with my heave jacket, pants and boots. We chat for a while and then he introduced me to his lovely wife. Small world!

As you exit the boat you are stop by another officer who ask you a few more stupid questions. I passed first with a problem; Adrian was behind me. Adrián told guy “I don’t speak English” (I could here the entire conversation through the intercoms). The officer’s response was “Well, you are speaking English now!” After that he asked Adrián a few questions (where is home? who is the president?) and then gave him a lesson about the importance of speaking English. The good thing is that Adrián had no clue about what the jerk was saying. I, on the other hand, was furious and wanted to come back and tell the guy to stop being an asshole! Stupid people with power!

We got gas at Port Angeles and then rode to the Heart of the Hills Campground in Olympic National Park a few miles away. It was foggy and raining when we got there. We waited for a while and then decided to look for a hotel. We checked in at Motel Super 8 in Port Angeles and spent the afternoon resting (blogging) in the room. In the late afternoon we went for a ride at the beautiful Hurricane Ridge Road. We had done this road by car with Lucas and Lucía a few years ago. We rode through the fog (clouds) for a while until we were on top of the clouds with clear skies. It was getting late so there was not a lot of sun and it was very cold but we continued all the way to the Hurricane Ridge Visitor Center and then rode back down. We went for a fancy dinner at Cafe Garden. We shared Fried Calamari (much better than any other fried calamari I had ever had) to start. For the main dish Adrían had the Seafood Pot Pie and I have a special of Sockeye Salmon. All great, delicious food. 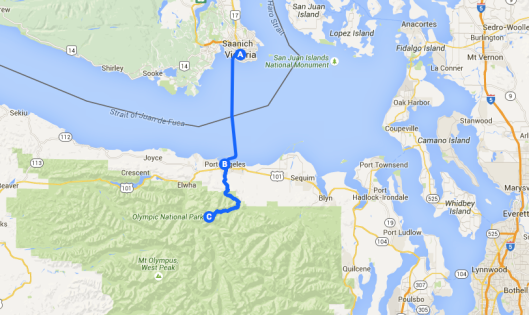